Do you remember in Star Trek when they used to pop off the every now and then to go and investigate some dangerous new planet?
Off would go Kirk, and Spock and Bones… and a Security chap in a red shirt.
Five minutes in (and that’s being generous) said red-shirted chappie would cop it.
Some days I wish I was writing for Star Trek.
I sort of liked the honesty of that approach, like an unwritten agreement between writer and viewer; Look, we know he’s gonna snuff, it you know he’s gonna snuff it, we could waste your time giving you some back-story, making you really feel for this guy, and the wife and kids he left behind… or you know, we could just slap him in a red shirt and get on with the show, cause we only have thirty minutes here, and twenty of that will be Kirk’s log…
It was nice.
Everyone knew where they stood.
Except for the Red-Shirt.
Those guys never saw it coming. 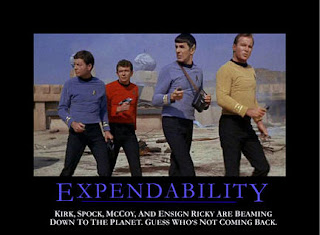 I admit it; I am currently lacking the patience to retrospectively fill out a character I invented purely for the purpose of killing off in three chapters time. He’s nothing but a walking talking plot device.
Literary cannon fodder.
Can’t I just slap him in a red shirt and be done with?
Ah, I could. But then you’d all know what was coming.
PS And yes, I wrote this Sunday evening whilst watching Star Trek and generally procrastinating.
Posted by Laura Mary at 18:52