A Plea to the Mice of Wiltshire

After my truly epic writing spree last weekend (6000 words and an entire chapter in a day and a half - is that a trumpet I hear blowing?) I have followed up this weekend with... barely a page.

I assure you this is because I am taking the time to mull over some deep ideas, it had nothing at all to do with the amount of wine I drank Friday night (or Saturday night...)

In my defense I was also a little distracted by an uninvited visitor. For a while now our tiniest cat, Brian (yep, Brian) has been bringing us... presents. Dead mice to be specific. And many of them. It's a lovely treat to come down to in the morning. Even better is when he's decide to eat it...

I shall stop there. 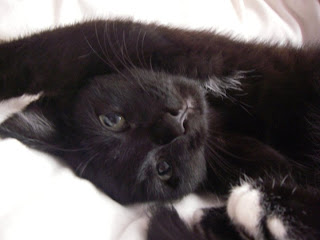 Don't be fooled - this dude is a cold blooded killer.
The last few times he's bought in such a present we've tried using our stern face, scowling at him and generally attempting to explain to a CAT that we do not appreciate the early morning mouse guts...
Well apparently some of this got through his fury little head. Because the next mouse he bought in was alive!
Cheers Brian.

I wonder if he's been trying to bring us live mice all this time, only being a cat he plays a little rough and just loved them too hard... Shall have to re-name him Lenny. Since then we've had two more live mice, one of which Fran tried to pretend she had caught herself. She made a show of running round with it in her mouth but the second I booted them both out the back door Mousy made a break for freedom and Fran decided she was too sophisticated for such shenanigans. 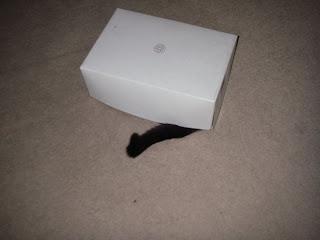 Anyway, I am pleased to report that all three live mice managed to leave the premises in the same state! How long for I can't guarantee as we have had several more dead ones since.

If the mice of Wiltshire have any common sense they will all go and hibernate - for the love of God, HIBERNATE! There's only so much death a girl can take before breakfast.
Posted by Laura Mary at 21:40