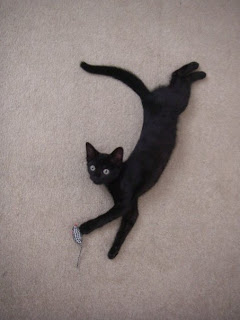 This is Fran, my magic cat (the mouse is called Florence)
The Story of Fran...﻿
One day I wished I had a cat. Two hours later the neighbour knocked on the door announcing that they had found a kitten in their loft a few days ago, couldn't locate the owners and would I like it?
Yes. Yes I would.
She was named Frances Isabella Grace.
Frances, after Frannie Goldsmith in Stephen King's 'The Stand', 'Isabella' after Isabella Rossellini, and 'Grace' after Grace Kelly.
Though most of the time I just call her 'Bean'.
To this day we have no idea where she came from of how she managed to get into the loft!
As I say, magic cat.
Posted by Laura Mary at 19:22