‘It is called a Pensieve’ said Dumbledore, ‘I sometimes find, and I am sure you know the feeling, that I simply have too many thoughts and memories crammed into my mind.’
‘Er.’ Said Harry, who couldn’t truthfully say that he had ever felt anything of the sort. 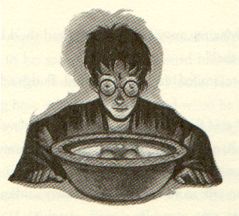 I’m with Dumbledore on this one. Far too many thoughts…

For some months now I have been ignoring an increasing large problem in my writing. I was ignoring it for several reasons. Firstly, I had a hard choice to make, and secondly whichever way I chose would result in the need for a drastic re-write… boo L

What started out as a novel for 9-11 year olds was now twice the length it should be for a book in that range, and far heavier too (theme wise, not weight wise! Although actually…) So clearly the book was heading into YA territory. Which would have been fine except that my main character was all of twelve years old and acting every year of it. Which just doesn’t work (no matter how much you stick your head in the sand and pretend it will all be okay!)

After something  of a stern telling off, and some subsequent words of advice over at my favourite writers' stomping ground, I was faced with this choice: age up or simplify down.

I could either cut down the story and simplify it for the intended 9-11 year old age group, or go with the flow and bump up the age of my main characters.

So how to decide? Did I embark on a reading spree and study more books of the same genre? Share my writing and ask for advice? Borrow Dumbledore’s Pensieve? Ah, I wish.
I did the next best thing – spent my bus money on some Rowntrees Randoms and walked home. Which was a good three miles.  Which meant a good 50 minutes thinking time. Luckily it’s not a very busy route so I don’t think more than three people witnessed me arguing with myself.

By the time I got home I’d figured out where the story was really heading, and it wasn’t a place for 9 year old readers. Or 12 year old characters. No matter how much I love them.
I think I finally understand the pain of killing your darlings. It sucks.

I am dreading re-writing the first four chapters, mostly because that was the one section I thought was pretty much complete! Now they’re lining the cat’s litter tray.
Oh well. You live and learn.

So back to Dumbledore and his Pensieve and how to tackle the re-write. I may not be able to pour my thoughts out into a bowl, but I do have the next best thing.

Yep, you guesses it. 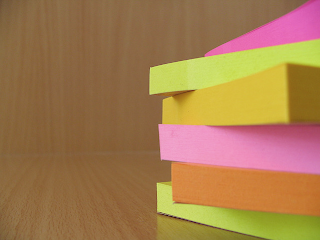 A few months back I had the slight mishap of losing a character, so I mapped out my plot in multi-coloured post-its on the wall.
As you do.
It turned out to be quite handy, so there they have stayed. As I started rewriting, things have started changing. Turns out my 15 year old is far more impatient than she was at 13, so things are moving at a quicker pace, and occasionally in a different order. God bless re-adhesive sticky notes. 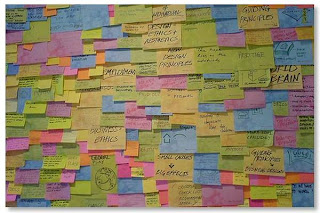 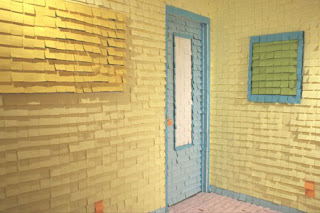 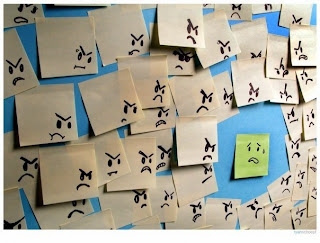 Well that's all from me this week, as I now have a couple of newly unruly teenagers to tend to!

Enjoy the sunshine while it lasts everyone!