The First (paper) Cut is the Deepest

Anyone who knows me well, knows two things; I own more shoes than it is possible to wear in a month, and I am obsessed with Harry Potter.
I’m too old to claim that Harry Potter is what got me reading; I loved books way before that (it is however what made me want to be a writer but that’s another blog for another day) But Harry was not my first love. Oh no, not at all...
The first book I can clearly remember reading on my own, was Roald Dahl’s 'The Enormous Crocodile'. It was Quentin Blake’s distinctive illustrations as much as the story that has stayed with me all these years – to this day I can clearly see the crocodile’s cunning disguises, I think the picnic bench was my favourite!
I was utterly terrified of that crocodile, and yet I would always sneak a peek at that book whenever I could, just to get a glimpse at those teeth! 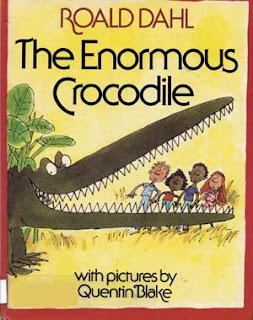 I also loved the ending, where the elephant flings him into the sun to be sizzled up like a sausage! Maybe it was this early exposure to violence that gave me my future bloodlust...
As a child I read a lot. Mostly comics from what I remember – they were the perfect thing to hide under my pillow and read by torchlight. My mum bought me Bunty, and I stole my brother’s Dandy. I also loved the Shirley Hughes ‘My Naughty Little Sister’ stories I remember my mum reading to me.
Enid Blyton also featured, I remember reading The Secret Seven and the Famous Five – for some reason my mum always bought Secret Seven books for my brother and Famous Five books for me – I much preferred the Secret Seven! I never liked Anne much and had my first literary crush on Jack! I distinctly remember one camping holiday when I was around 8 or 9 pinching all my brother’s books and sneaking off to read them under the caravan.
Later, at secondary school, I read whatever my friends were reading, I remember Judy Blume and the Sweet Valley High books fondly, but when I reached the age of 12 or so, I discovered something much better.
Point Horror. 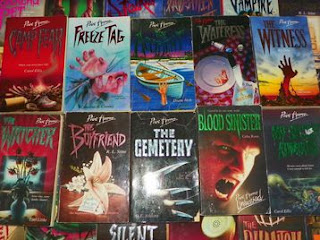 Oh how I loved them! I still have a box full of them in my cupboard now, The Cemetery, The Body, Freeze Tag – My favourite, I remember, was ‘Fatal Secrets’ I mean the title says it all!
They were the first books I really got wrapped up in, and I even had a stab at writing one myself (very, very badly I hasten to add!)
Despite the fact that these books all seemed to follow the same standard formula, I never grew tired of them.
Until one day I discovered something even better.
I guess I would have been about 14, possible 15 and was rooting around my favourite second hand bookshop, probably looking for more Point Horror books, when I picked up an old battered copy of a Pet Semetary by Stephen King.
It was three times as big as the books I was used to reading – the only books that size I had tackled were the ‘classics’ I resented reading at school (I love them now by the way - funny how Jane Austen is that much more enjoyable when you don’t have to face an exam on the subject!)
I bought Pet Semetary and began reading it the same afternoon, and within a few chapters, I had fallen head over heels in love.
This was unlike anything I had ever read – it gave me the promised horror I was after, but oh did it give me so much more! These were real people with real lives and I was right there in the thick of it. The simple moment Louis drew back the bed covers to reveal his muddy feet – proof that his trip to the cemetery had not been a dream after all, chilled me more than all the Point Horrors put together, and to this day my heart aches over the chapter where Louis dreams of a life in which Gage hadn’t died, but had grown up, graduated got married… I cried into my pillow reading that, it utterly broke my heart in a way I never knew fiction could. (Only one other book has made me sob so hard – We’re back into Rowling territory again so I’ll save that for another day)
But from that day on, the Point Horrors were unceremoniously shoved aside; I had fallen in love with Stephen King.
For the next two or three years I read whatever Stephen King I could lay my hands on – that little second hand bookshop served me well. I shed a few more tears for John Coffey (‘like the drink, only spelled differently’) had several sleepless nights as Trisha McFarland wandered through the woods and stayed up till three in the morning on a school night to find out if Robinson would get his revenge on Dolan and his Cadillac.
When I was about 18, I picked up a couple of these Harry Potter books that people were starting to make a fuss about. Apparently they looked like kids books but were actually very good...
And so began an entirely different love affair. For the next eleven years I was lost to Harry. I read them over and over, looking for clues I had missed the first time, and each book prompted endless discussions with my sister as we puzzled over the mysteries of it all (and wished desperately that it were real and that maybe out letters to Hogwarts had got lost in the post…)
I queued up for the midnight book releases in Winchester, Rainham and Swindon as I went to university, graduated and moved out on my own. It’s been the longest relationship of my life, and I admit to feeling a little bereft when it was all over.
But life goes on, by this point I was reading anything and everything that caught my eye and my bookshelves were bulging. My stack of books to read was growing taller than I was and still I was collecting more (the collection continues and has now spread to the loft)
And then, a few years ago, I picked up a copy of ‘The Stand’ which had somehow slipped through the net during my earlier years, and oh how I fell all over again! It took less than three pages this time to remind me why I had loved him so much in the first place. It was like meeting up with an old friend you’ve not seen in years – within minutes you are reminiscing about the good old days and wondering why you ever lost touch. I love that feeling of picking up a book and knowing instantly that you are in good hands.
Because above anything else, what I learnt from reading Stephen King, was how to recognise and appreciate good writing. Whether you like his stories of not, you can’t deny that he is a master at what he does. I go back to his books again and again, not only to read, but these days to study them, and see how it’s done. His book On Writing hasn’t left my bedside table since I seriously started writing.
I have been kinder to Stephen since our reunion, typically every third or fourth book I read now is one of his, whether it is something new or an old favourite. He sits on my shelf right now, alongside a bespectacled young wizard.
If ever I mention to my book worm pal, that I’m reading an old favourite she always asks the same question ‘Potter or King?’
She knows me so well. 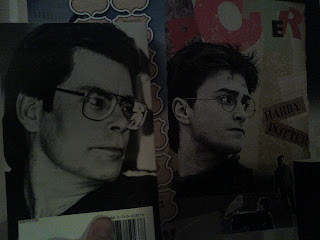