This week, I have mostly been deleting.
As is inevitable with a rewrite, things have changed.
Things have changed to the extent that in my previous version of Chapter 14, my two MCs were bumbling along together. Only now I have decided to split them up for a bit (reckon they can cover far more ground on their own, besides the time apart will do them good!)
Only it does mean I am having something of a difficulty with my re-write.
My current method is to take the previous version, sit in the garden/living room/bath/bus and doodle all over it, crossing out the rubbish, tweaking here and there – any extra scenes or other big changes are made by post it notes (preferably in a wide variety of colour – I like the green best) But now I have hit a problem not even my trusty post-its can solve.
My current editing style is not working! I have been tweaking and pruning only to find the wrong characters popping up where they no longer should be!
It has got to the stage where it is actually more of an effort to patch up what is already there, than it would be to wipe the slate clean and start again.
Which is a little nerve racking!
The main reason I wok so closely against the previous version is that I am worried I will miss something – forget some key fact, or lose a really good line…
The truth is, I won’t. If there really was some gold in there somewhere, I’m sure it’ll resurface at some point. And anything that stays forgotten? Well, it can’t have been worth remembering in the first place.
So I hit delete. Erased the whole chapter!
I then got a little drunk on the power of it all and had to restrain myself from deleting the entire thing and cackling wildly like a demented Disney villain (I’m thinking Ursula in The Little Mermaid when she grows all big and turns the sea into a giant whirlpool! Mwah-ha-ha!!!) 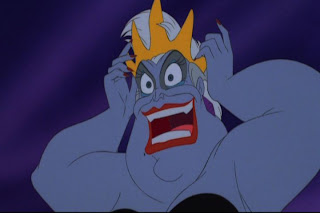 Um… where was I?
Once again it’s about finding some kind of balance – don’t be too precious about every little word you’ve written, but don’t get too trigger happy on the delete button either!
Well I’m off to do some more work (although oddly feeling like watching a bunch of Disney films now…)
Have a good weekend – see you next week!
Laura
Posted by Laura Mary at 12:21