I was a Teenage Book Thief

Okay let’s clarify that before I have the police knocking on my door. I didn’t actually steal any books. Nor do I have any unreturned library books collecting dust and fines alike (I hope?)

But I did steal words.

I never had a diary, but what I did have was a notebook (or several) that I would fill with favourite lines from books, songs, and what appears to be several quotes from Buffy The Vampire Slayer (hey, she had some good advice!)
As I got older the lyrics and Buffy quotes were dropped and more and more pages from books found their way into my notebooks.

Whilst unpacking (yet more boxes!) I re-discovered some of these books, and thought I’d share some of the things I considered important enough to copy out for myself. 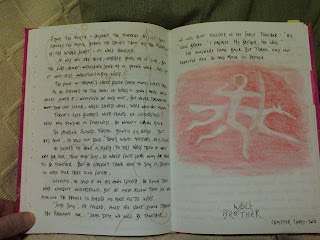 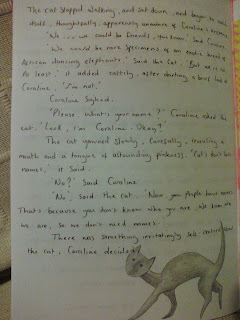 ‘We…we could be friends, you know’ said Coraline
‘We could be rare specimens of an exotic breed of African dancing elephant’ said the cat ‘but we’re not. At least’ it added cattily, after darting a look at Coraline, ‘I’m not.’ 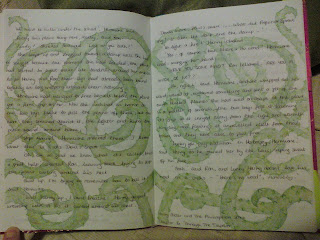 'Devil’s Snare, Devil’s Snare… What did professor Sprout say? It likes the dark and the damp– ’
‘So light a fire!’ Harry choked
‘Yes of course – but there’s no wood! Hermione cried wringing her hands.
‘HAVE YOU GONE ? Ron bellowed ‘ YOU A WITCH OR NOT?’ 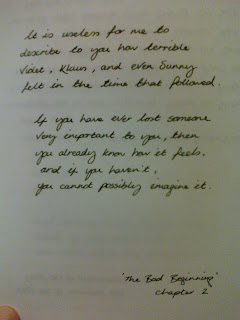 ‘If you have ever lost someone very important to you, then you already know how it feels, and if you haven’t, you cannot possibly imagine it.’ 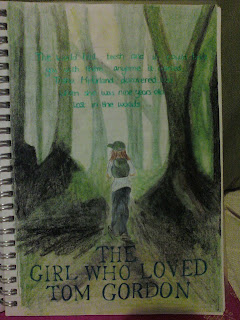 ‘The world had teeth and it could bite you with them anytime it wanted. Trisha Mcfarland discovered this when she was nine years old. Lost in the woods.’ 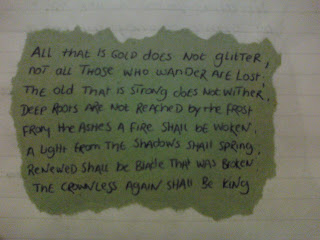 ‘Not all those who wander are lost’

Lord of The Rings - JRR Tolkein 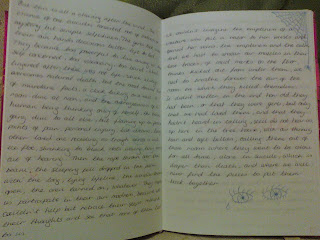 ‘It didn’t matter in the end how old they had been, or that they were girls, but only that we had loved them, and that they hadn’t heard us calling, still do not hear us…calling them out of those rooms where they went to be alone for all time…and where we will never find the pieces to put them back together.’

‘There are some things you can’t share without ending up liking each other, and knocking out a twelve foot mountain Troll is one of them’ 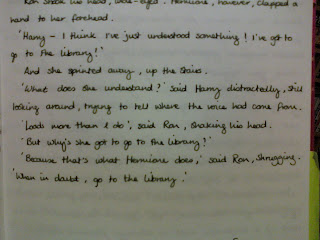 ‘…that’s what Hermione does,’ said Ron shrugging ‘When in doubt, go to the library’

I haven’t added to this book in about eight years or so, but the impulse to carry words with me hasn’t gone away. No, I’ve just discovered a different art form, that’s all… 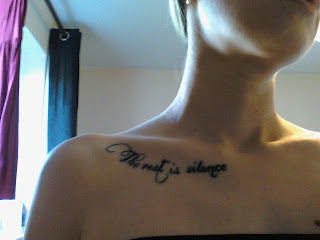 Have a good weekend folks!
Posted by Laura Mary at 11:33